I am currenty learning ASL, so I drew the alphabet as practice and as a reference for myself. 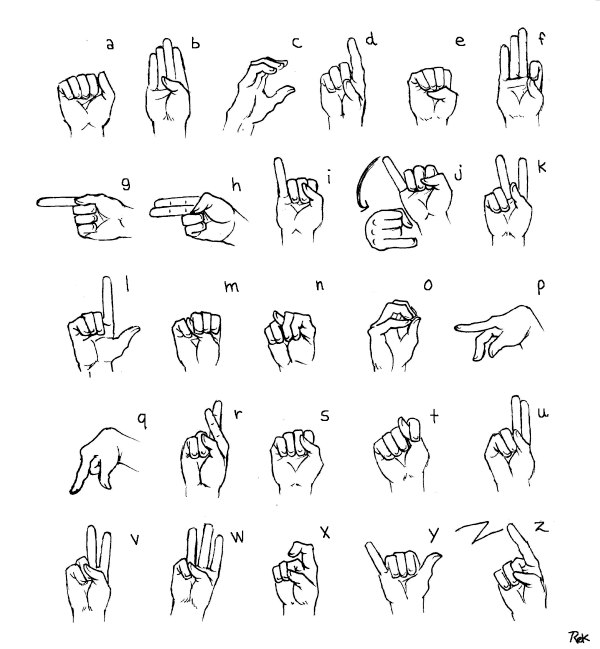 Contrary to common belief, ASL is not structured like English. It has its own grammar, lexicon and structure. In English when you ask a question say, pitch matters, but in ASL your hand sign as well as your eyebrows will help mark a question.

Disclaimer: I am a hearing person, therefore a non-native signer, and because I am there may be mistakes in the following. I am merely compiling notes to teach myself ASL.

ASL is a way to broaden understanding of another culture, and all that this entails. Sign language may be used to advantage at a distance, which the eye can reach but not the ear, and still more frequently when silence or secrecy is desired.

How to construct phrases

Subject + Verb. ASL allows you to put the subject before or after the verb when making simple sentences, the order doesn't matter.
Subject > verb, and verb > subject are both ok.

Direct objects. The direct object can go either before the subject or after the verb.

**Word order may matter in certain phrases, in such situations leave them in the common English order.

Questions. When asking questions, the standard format is Time(if any) + Subject + Object + Question.

Depicting verbs (classifiers) are hand-shapes that represent a noun group, used to enrich sentences by conveying more information. It is used in ASL to show movement, location, and appearance.

Say a signer signs "Car", a classifier can be used after to show where it's going, how it moves, what it looks like, and where it is located.

Classfiers are referred to in writing as a series of letters and numbers, ex: CL:5. "CL" is short for classifier, 5 refers to the numbers of fingers that are up. When signing, a signer may add variations to the classifier handshapes by bending fingers, and by positioning the hand horizontally.

For example, the CL:1 handshape (which is a 1 handshape) can be used for a person that is standing, or for a thin object(pole, pencil). The same 1 handshape, but with the finger bent, can mean a snake, or an old person.

When chaining classifiers, the noun is always signed before its classifier.